Unique Items are items that are very rare to find in game and don't drop very often, they consist of equipment, consumable items, and also other items that have other uses. These rare items often are extremely powerful compared to regular equipment or even sunsets. Most unique items have hidden stats (denoted by "?" in place of actual numbers in the item description). They also become stronger based on the level of the character that currently has the item equipped.

A number of Special Equipments are not limited by character or level, and in many cases have cumulative effect. They change color as your character is killed; starting at dark blue, it changes to lighter blue, then to a faint blue, then to white, and then to red at which point the item will eventually disappear! In addition to their effects and base stats they add, unique equipments will add the approximate defense and stats that the earth equipment of your character level would add, for instance an Elein Belt worn by a level 300 character will add less defense than if worn by a level 600 character.

Note that for the stat tables, only the BASE values these items add are listed, since they are static amounts, the uniques will add the above mentioned bonuses in ADDITION to these stats, so you may see an item adds all 0s for stats but then in reality may add a bit of some stats anyways (as in the example, Elein will add power).

All unique equipment has a chance to Shade (lose a shade of color) or Fade (disappear completely) upon death in any location other than one of the 3 Battle Arena maps. Shading chances are as follows:

Note that the chance of shading is calculated individually for each item when multiple uniques are worn, some may shade while other may not in the same death. 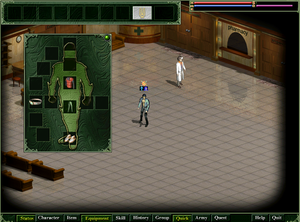 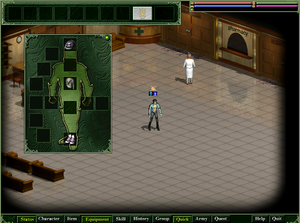 Set Effect: Decrease damage received from other players by 40%. 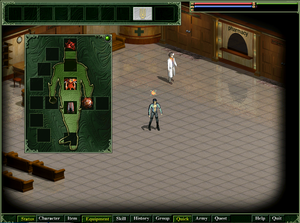 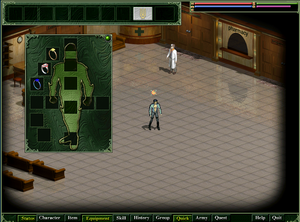 Set Effect: When worn together increase the attributes by +2 per bonus point for ALL stats. Note: these rings can be worn by non-mage classes as well. 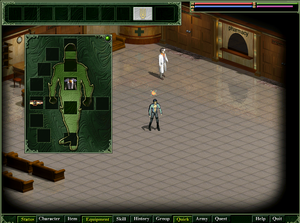 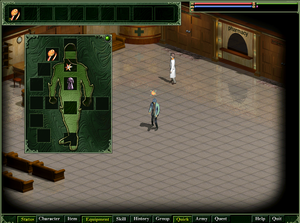 Gives permanent anubyne-like effect (does NOT protect against dispell). 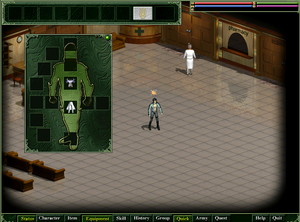 All unique weapons can be worn by their respective classes that can normally wear that type of weapon (for example Destino can wear the sword, bow, or gun), Additionally all unique weapons will have a "splash damage" effect that deals 33% of all opponents remaining HP within a large area. 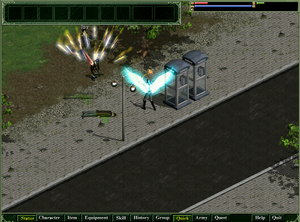 Nemesis Bow on a Destino 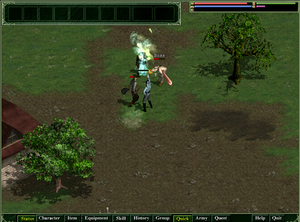 Madness Gun on a Destino 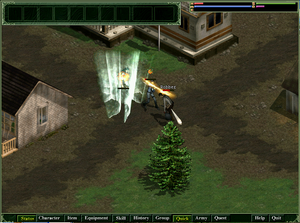 Spear of Ares on a Jarexx 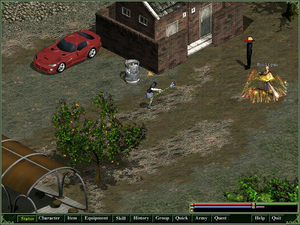 Wand of Gaia on a Kitara 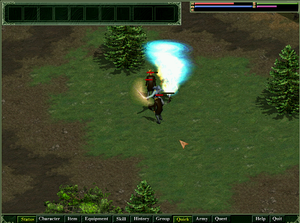 Sword of Aeolus on a Destino

Chips are found as a drop in dungeons, in Redmoon Fortunes, or created by mailing the Alchemist. Chip X-0 can be created by mailing "Alchemist" 25x Legendary Medicine + 50 million money. Upgrade by mailing one (1) Chip Core (purchased from Sahara trader for two (2) Durability) and either Chip X or Chip Y to Alchemist until level 4. The maximum level of a chip is 9 (Chip X-9 / Chip Y-9). 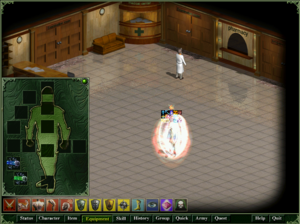 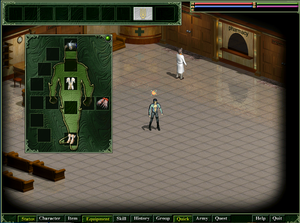 Several Misc. uniques that don't belong to a set

Adds 500 to all stats for an army commander (note that any character can wear this at any level, but only a level 400+ army commander will receive the stat bonus).

Gives permanent visyne effect (this will not allow you to see invisible GM/GC characters).

Alongside the unique equipments, there is another group of items that are either usable or gained through events or other means. These items have special purposes that can aid your character.

Allows you to re-allocate all of your bonus points according to your level (your stats get reset to 10-10-10-10 and you receive the appropriate amount of BPs to add). 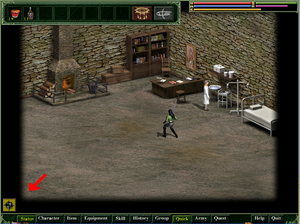 Protection on a Destino, the icon indicated at the bottom left

Prevents any uniques from shading/fading and items from dropping upon your first death, otherwise it has an unlimited duration. Protections do not prevent you from losing exp or any boosters you have active, however they do not disappear if you die in the Battle Arena. You must active a protection by consuming it for it to take effect, otherwise upon your death it will remain in your inventory and do nothing, once activated it will move to the bottom left of your screen in the area boosters normally show up as a yellow box with a protection graphic displayed in it.

Lowers your current honor by 100 points. 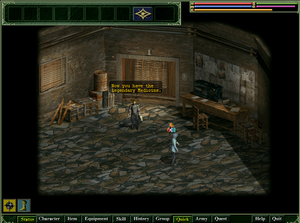 Gambling for a Legendary Medicine at Kasham's

Formerly an item won through the Battle Dimension, if used while you are dead it will revive you, also used as currency at the sahara trader. Durability is the second of two possible items received from auto-gambling bonus points after level 1150. Durability also drop from monsters (any map.)

When used inside a dungeon, you will be warped to that dungeon's entrance.

When used, you will be warped to the nearest hospital.

When mailed to "Alchemist" along with 10 quantities of a single C-vend piece, you will receive the corresponding piece of Mars equipment from the mail in return. | (ie. 10x C-Vend Glove + Radiation of Mars = Gloves of Mars)

Radiation of Mars is a reagent in additional Alchemist recipes as well; refer to Alchemy for specifics.

When mailed to "Alchemist" along with 10 quantities of a single A-vend piece, you will receive the corresponding piece of Saturnus equipment from the mail in return. | (ie. 10x A-Vend Glove + Radiation of Saturnus = Gloves of Saturnus)

Radiation of Saturnus is a reagent in additional Alchemist recipes as well; refer to Alchemy for specifics.

Battle Dimension is currently under Maintenance

Found as a monster drop, this will automatically turn into a Redmoon Fortune (see above) at the end of each day (0:00 GMT). 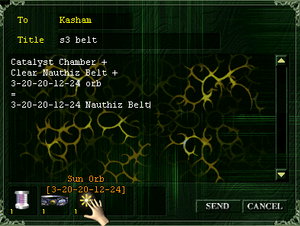 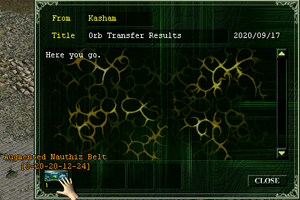 Found from Super Wyvern in School Dungeon 3rd Floor. Use along with a Sun Orb + Clear Sunset to create a sunset with the stats that is on the Sun Orb. To use: